Sometimes You Just Need a Hug

Posted on November 4, 2019 by SpookyMrsGreen

My family is recovering from serious trauma. Nearly six years ago, my father-in-law was seriously injured in a cycling accident. He was training for an event where he would cycle from one end of Ireland to the other, having previously cycled from Lands End to John O’Groats, the Coast to Coast from West to East England, and many more epic cycle rides to raise money for local cancer charities. He is now a shadow of the vibrant personality he used to be, and it hurts every day. My mother-in-law retired from work and became his full-time carer once he was released from a rehabilitation facility. He is disabled, and he has a brain injury. His short-term memory is damaged, and he has no interest in activities. Or at least, that’s what I thought. 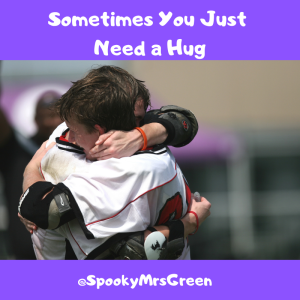 I had almost given up hope of him ever recovering even just a speck of his former self, but his wife remained stubborn in her task. She sends him to daycare facilities where he has access to gym equipment, he can interact with other people in similar situations, and he has trained professionals to help him with general care. She takes him out to social events, to the pub, to visit family and friends, for a walk. She also fought to have speech therapy with him, and it appears to be taking effect. During the past few weeks he has begun to respond more during conversation. Although his speech is very limited, and he has three or four sentences that he repeats, he does occasionally surprise us with glimpses of his old self. He is in there, but he is trapped. And one evening, as they visited us for a casual chat, he walked into the kitchen to find me, and he gave me a big bear hug. It stopped me in my tracks. Normally he would tell me he is tired, or he wants to go home. But this time he wanted to convey that he cares, that he knows me, and that he is with us. And that means everything to a broken family struggling to mend. Keep fighting, Steve. We haven’t given up on you yet.

Are you Team Jack or Team Danny? Sign up now and receive your FREE copy of It’s Complicated from #TheRedcliffeNovels series set in Cornwall, England.

3 Responses to Sometimes You Just Need a Hug

Exploring the World of Fiction