Posted on November 7, 2013 by SpookyMrsGreen

Today I have the pleasure of showcasing the work of a fellow local author, Dan Weatherer. He writes horror stories and is from my part of the UK, the Staffordshire Moorlands, and we even crossed paths when we both worked at the famous Alton Towers theme park back in our younger days!

Dan Weatherer’s debut horror collection The Soul That Screamed discusses the curiosity of man. Whether exploring the origins of local legend or dabbling with the dark arts, the unforeseen and often terrifying effects of our ignorant actions are laid bare inside.

Tales that include the terrifying origins of a mysterious chained Oak, a pensioner with murderous intentions, a young girl lost in death , the ignorance of a charlatan, a box that should remain unopened, a misguided pact with a demon, a cave harbouring a gruesome secret and more lay within these pages of Dan Weatherer’s debut collection The Soul That Screamed.

Dan Weatherer began writing horror after losing his job at the start of 2013, a cruel twist of fate that turned out to be a blessing in disguise! 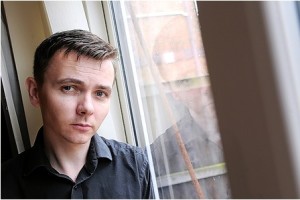 Discovered and published by Scathe meic Beorh, his first ever tale The Legend of the Chained Oak was an immediate success and was made into a movie due Autumn 2014.
His next major project was a solo collection of short stories titled The Soul That Screamed (released Oct 23rd 2013.) He will also collaborate with film-maker John Williams in the near future.

Dan Weatherer lives in Staffordshire, where he is married to his beautiful wife Jenni and is a (proud) full time dad to his daughter Bethany.
The Works of Dan Weatherer

The Legend of the Chained Oak – May 2013, Haunted magazine.

Film work:
Writer and co-producer of the movie “The Legend of the Chained Oak” (Weatherer/Maynard Productions)