Posted on December 19, 2011 by SpookyMrsGreen

I’m not exactly a keen political observer, or even very knowledgeable on the activities of our UK political parties, but I was listening to the daily breakfast phone-in show on BBC Radio 5 Live today, and it was very interesting. The subject was a recent announcement by the Conservative party, where they propose to introduce tax breaks for married couples, in a bid to try and entice people back into the marriage institution. Naturally this sparked a very lively debate from people with all sorts of ideas and opinions.

One was from a single mother who strongly opposes the move, since she claims that single parents do not receive sufficient financial help from the government, and are in the majority of poor and poverty stricken families. Another came from a devout Christian man who believes that we should reinforce the sanctity of marriage, and that women should be encouraged to remain at home raising the children, while their husbands earn a wage. 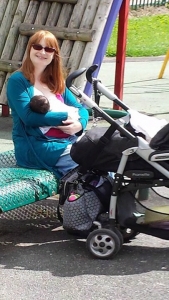 Naturally this brought on a whole onslaught of opposition from women claiming that the men were once again trying to oppress us, and that we should not return to a 1950s ideal of the nuclear family. They said that society has grown and moved on so much since that time, that it simply couldn’t work. And then what about same sex married couples, or indeed heterosexual couples where the mother works full time and the father stays home with the children? All very valid questions, I agree.

I too have grappled with the idea of marriage. My parents divorced when I was seventeen, after a lengthy and painful separation involving court cases, the CSA and various other legal officials. Needless to say, it damaged me, and my younger brother and sister. I vowed that I would never marry because I didn’t see the point. It was too painful when you inevitably split up, and I could never put my children through the same trauma. Then I met a man, fell in love, and now we are married with a baby and I am happy.

I changed my mind about the idea of marriage at some point in my early twenties. My husband and me got engaged while we were at university, as a way to remain strong during our separation at different institutions. But neither one of us at that time really appreciated the true meaning of getting married. We just planned to drift along for a while and see where we ended up. Gradually however, my biological clock started ticking, and I realised that marriage was important to me, because I wanted to be married when we had our children.

The interesting observation I have made is that many of our close friends are also married, and happily so. They, along with me and my husband, all spent several years in monogamous relationships before tying the knot. It seems that we were all cautious about making such a commitment, but eventually we all agreed that it is important. I can’t explain why, but marriage is no longer simply a piece of paper to me. It used to be just that, but somewhere along the way, I matured, and I realised that I’m not a weak, helpless female after all, simply because I love my husband and want to be with him.

Then comes the issue of being a housewife. Again, this was something that I never aspired to. I wanted an exciting life, living in a big city and working at a high-powered important job. I blithely went off to university without a care in the world, and during my education I was convinced that once I graduated, I would quickly find the perfect career job, because that’s what all my college tutors and careers advisors told me.

Oh how wrong they were. And how naïve was I. Since that time I have never even come close to earning the kind of salary a graduate is supposed to receive. I went from working in entry level office administration jobs, to a part time shop assistant role, and finally I went on maternity leave and have now handed in my notice. I will still work, but this time I am an author and a writer, working from home, with no fixed or reliable income.

And therein lies a huge issue. I have given up my financial independence, and my car because we couldn’t afford to keep it. I am now a housewife. But actually, I don’t feel trapped, or inferior, or oppressed. I feel liberated, because I realise that the corporate world isn’t right for me, and I could never move in the sort of circles that I was taught to aspire to while at school and college. That kind of life is not mine. I am a creative, imaginative, quiet person, and express myself through my words. That is, after I have cared for the baby, cleaned the house, and supported my husband in his various income-earning activities.

That is the price of 21st century Western living. It isn’t all bad. We just need to take a step back, relax a little, and stop finding fault and negativity in everything our government attempts to do. I believe that they really are trying to help people, but sometimes they are misunderstood, or indeed not listened to properly. And if I could be eligible for one of these tax breaks, it would be very welcome.

Did you enjoy this article? Join my tribe to keep informed of new stories from SpookyMrsGreen, and I will send you a fabulous FREE book from my Redcliffe novels series.

Life Through the Lens

the photography of Ian Simpson

Simple tips to help you cope with daily pain: my words and observations